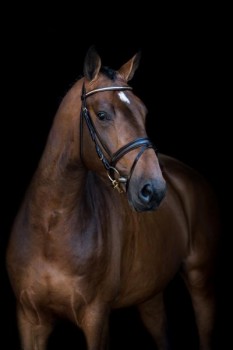 Hector AS was approved by the Zangersheide Studbook at the stallion selection show Deauville France last Sunday 2022 02 13!

Hector AS' sire is the famous stallion Diamant de Semilly and his dam is the great Domina van 't Merelsnest. She has combined the incredible Darco as her father with Artemis van 't Merelsnest, a daughter of the influential Voltaire.

Jugendnixe van ‘t Merelsnest has the mighty Mr. Blue as her father and Graciana van 't Merelsnest as her mother.

Unfortunately, the beautiful and powerful Graciana van 't Merelsnest (Lord Z) passed away when she was only 4.5 years old after a tooth extraction.

Graciana was Relindi van ’t Merelsnest’s daughter and so we combined Darco again as the great sire with the first great mare Chiquita.

Chiquita deserves a statue. This Hanoverian mare had it all!  She was intelligent, powerful, beautiful, bloody.  An eye-catcher as you know she was a ¾ thoroughbred out of Cardinal XX x Julius Caesar XX. She was way ahead of her time and so were her descendants!

However, we can trace her influential ancestors back centuries so that we can rely on a strong foundation.

Also last month, Chacco's Talent Z, a Chacco Blue’s son received the approval from Studbook KWPN to participate in the last session of the KWPN stallion selection, the tests under the saddle.

This website uses cookies. This way we can ensure that your browsing experience is made even more pleasant.
Learn more